A year ago, one young Namibian woman attended a charity event that inspired to her action in aid of people…

A year ago, one young Namibian woman attended a charity event that inspired to her action in aid of people…

Care in All Languages

A year ago, one young Namibian woman attended a charity event that inspired to her action in aid of people who are hearing impaired. In her realisation of the difficulties facing this sector of society, she decided to learn how to use sign language, to be able to communicate in this, often neglected, language. “It’s a whole different language that you need to communicate with people who are hearing impaired, and there are so many of them and you don’t know, you just assume you know everyone can talk, everyone can hear and, that’s when it really hit me.” Says Daniella Grünewald.

“I also thought, studying Psychology, it’s important to be able to talk to people, because I think they are the most vulnerable in society.” Daniella is a third year student at the University of Namibia studying Psychology and Religious studies. She is also the Vice President and Project Coordinator of the Rotaract Club of Windhoek. Taking up sign language classes was the first step she took, it lead her to realise the need in Namibia for Sign Language Dictionaries. “After the course, I spoke to my teacher to find out what they need and she told me sign language dictionaries, they have no money to finance the production of the sign language dictionaries. So I took it as an initiative to do it, to raise the funds. It’s still a long way to go.”

To start raising the funds to have these dictionaries printed, Daniella is planning an event for the 22nd of July 2017, called Dollar for Sign to be held at Jojos in Windhoek. The event has an exciting line up, including Ashwyn – The Performer, Evolve & Fire Entertainment, Sean K, Moon Goddess Dance Studio and Fusion Funk Dance Studio. Proceeds of Dollar for Sign are going towards the cost of having the dictionaries printed. “The artists have been very helpful. It has been absolutely outstanding. I was scared of the fact I would have to ask them do it for free but everyone’s been willing to support.”

Once Daniella reaches her target and the dictionaries are printed they will be handed over to the Deaf Association of Namibia she explains. Afterwards they will be distributed to academic institutions and libraries in the Khomas Region. Daniella’s hope is that she will be able to expand this project and raise funds to have dictionaries printed for all the regions in Namibia. 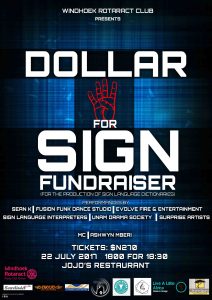 For now, Daniella will start with her Dollar for Sign event, “It is still a long way to go. For now we’re hoping for the best and that it’ll be a big turn out on Saturday.”

When asked why this cause needs support, Daniella notes, “We’re all humans. We are a family, we’re a country, and we should all be involved. We should know that there is someone out there that can’t hear and be considerate of it as well.” 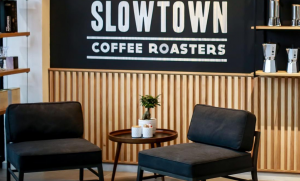 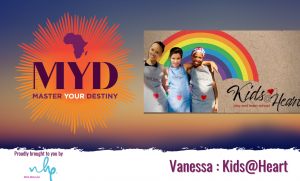