“History is so important for us to have a future, the two are siblings and the one can’t go without the other.” Says Elize as she walks around the site of this new exhibition in an old and stately house that stands partially vacant in Klein Windhoek.

“Slowly we built ourselves back but we released that if we can get our members to be active again, we’ll have a stronger voice and this way we will find a way into the future.”

of the Arts Association Heritage Trust in 2007. When we began we first showcased the many collections of artworks of the association. This organisation has been collecting works of Namibian art since 1947. We didn’t start running programs at first; we had to find our feet first. Slowly we built ourselves back but we realised that if we can get our members to be active again, we’ll have a stronger voice and this way we will find a way into the future.” Says Elize.

“There are many more artists now in Namibia than there used to be and that was also brought about by the contributions of our institutions. Artists were able to go and study. It took time but now we have really trained artists. Professionals that are in need of support and we can offer that support as an organisation.”

The revival and call for members to be part of supporting art and visual creativity in Namibia, is taking place in the form of an exhibition titled, Back to the Future, an is an exhibition of Namibian Masters and Contemporaries paired with a mix of Art Film Talks.

Elize explains what you can expect to see in this exhibition and also what is happening in the arena of fine arts today. “There is also of emphasis on photography, that medium is a totally new medium for the fine art genre. In the past photography wasn’t acknowledged as fine art but now photography is coming into the realm of fine art.”

“There was an almost elitism around what is fine art and what is craft. Today that barrier is brittle.” 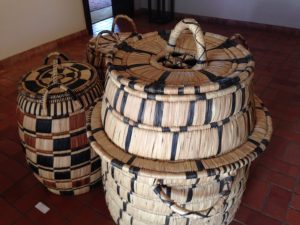 “Another development is in craft. You will see that in this exhibition we have included craft. Back when my organisation started to do this collection, they saw these works as beautiful objects that were hand made products, made with love, attention and pride by craftspeople but then, there was an almost elitism around what is fine art and what is craft. Today that barrier is brittle, it is becoming thinner and you see that more international museums are allowing the medium to come into their museum. Be it through large installations of crochet or knitted works for example.”

“The fine artists are finding inspiration in crafts again and are learning craft skills and reinterpreting them in grand monumental pieces. For me that is very liberating.”

As you walk through the halls of this old house and past Namibian art through the ages, the evolution of our art is evident. Elize explains that today you see many more voices in our art, “Different perspectives and voices have become more dominant. Now you see works that depict these perspectives, from feminist movements to post colonial movements.”

Come and see for yourself, the history and the future of Namibian art and artists at the Back to the Future Exhibition which is at 38 Metje Street, Klein Windhoek, running from the 14th to the 24th of February 2017.

More than 100 artworks and artifacts from the Arts Association Heritage Trust await you. In addition to the exhibition, the AAHT will be hosting three Art Film Talks. The films include the story of Frida Kahlo, a documentary on making art from waste in Brazil and a documentary about the critique of art. 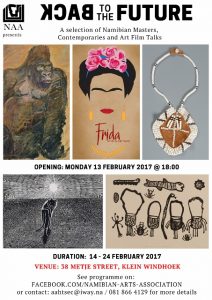 Opening Times are Monday to Thursday 9am – 6pm, Fridays 9am – 4pm. Closed for lunch.